Science says: eat with your kids

Science says: eat with your kids 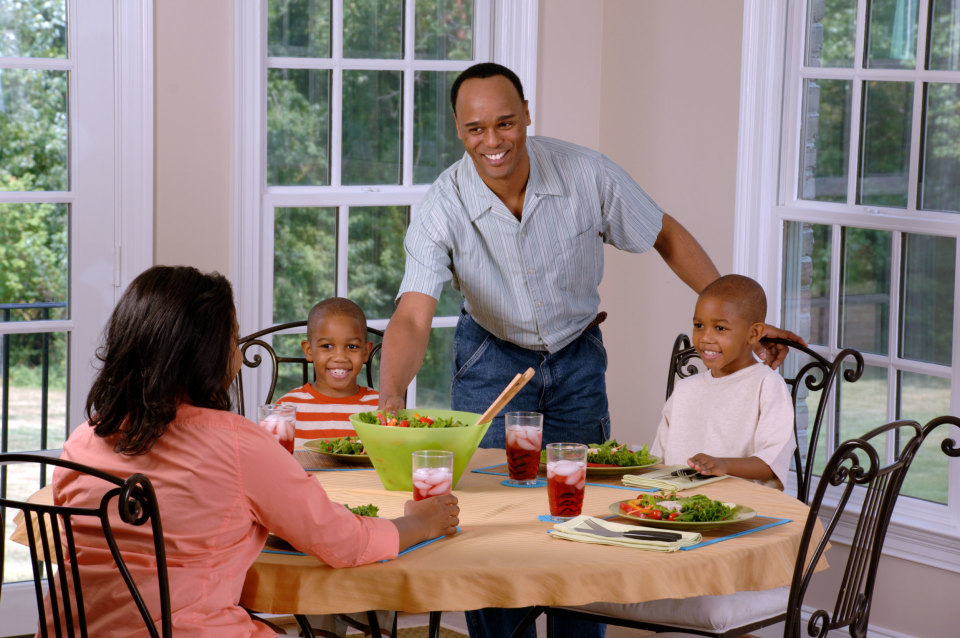 As a family therapist, I often have the impulse to tell families to go home and have dinner together rather than spending an hour with me. And 20 years of research in North America, Europe and Australia back up my enthusiasm for family dinners. It turns out that sitting down for a nightly meal is great for the brain, the body and the spirit. And that nightly dinner doesn’t have to be a gourmet meal that took three hours to cook, nor does it need to be made with organic arugula and heirloom parsnips.

For starters, researchers found that for young children, dinnertime conversation boosts vocabulary even more than being read aloud to. The researchers counted the number of rare words – those not found on a list of 3,000 most common words – that the families used during dinner conversation. Young kids learned 1,000 rare words at the dinner table, compared to only 143 from parents reading storybooks aloud. Kids who have a large vocabulary read earlier and more easily.

Other researchers reported a consistent association between family dinner frequency and teen academic performance. Adolescents who ate family meals 5 to 7 times a week were twice as likely to get A’s in school as those who ate dinner with their families fewer than two times a week.

Does a body good

Children who eat regular family dinners also consume more fruits, vegetables, vitamins and micronutrients, as well as fewer fried foods and soft drinks. And the nutritional benefits keep paying dividends even after kids grow up: young adults who ate regular family meals as teens are less likely to be obese and more likely to eat healthily once they live on their own.

Some research has even found a connection between regular family dinners and the reduction of symptoms in medical disorders, such as asthma. The benefit might be due to two possible byproducts of a shared family meal: lower anxiety and the chance to check in about a child’s medication compliance.

It isn’t just the presence of healthy foods that leads to all these benefits. The dinner atmosphere is also important. Parents need to be warm and engaged, rather than controlling and restrictive, to encourage healthy eating in their children.

But all bets are off if the TV is on during dinner. In one study, American kindergartners who watched TV during dinner were more likely to be overweight by the time they were in third grade. The association between TV-watching during dinner and overweightness in children was also reported in Sweden, Finland and Portugal.

In addition, a stack of studies link regular family dinners with lowering a host of high risk teenage behaviors parents fear: smoking, binge drinking, marijuana use, violence, school problems, eating disorders and sexual activity. In one study of more than 5,000 Minnesota teens, researchers concluded that regular family dinners were associated with lower rates of depression and suicidal thoughts. In a very recent study, kids who had been victims of cyberbullying bounced back more readily if they had regular family dinners. Family dinners have been found to be a more powerful deterrent against high-risk teen behaviors than church attendance or good grades.

There are also associations between regular family dinners and good behaviors, not just the absence of bad ones. In a New Zealand study, a higher frequency of family meals was strongly associated with positive moods in adolescents. Similarly, other researchers have shown that teens who dine regularly with their families also have a more positive view of the future, compared to their peers who don’t eat with parents.

What’s so magical about mealtime?

In most industrialized countries, families don’t farm together, play musical instruments or stitch quilts on the porch. So dinner is the most reliable way for families to connect and find out what’s going on with each other. In a survey, American teens were asked when they were most likely to talk with their parents: dinner was their top answer. Kids who eat dinner with their parents experience less stress and have a better relationship with them. This daily mealtime connection is like a seat belt for traveling the potholed road of childhood and adolescence and all its possible risky behaviors.

Of course, the real power of dinners lies in their interpersonal quality. If family members sit in stony silence, if parents yell at each other, or scold their kids, family dinner won’t confer positive benefits. Sharing a roast chicken won’t magically transform parent-child relationships. But, dinner may be the one time of the day when a parent and child can share a positive experience – a well-cooked meal, a joke, or a story – and these small moments can gain momentum to create stronger connections away from the table.

This article is republished from The Conversation under a Creative Commons license. Read the original article.